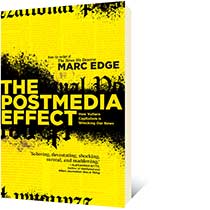 The Postmedia Effect: How Vulture Capitalism is Wrecking Our News

About The Postmedia Effect

Even as their readers move on–line and their advertisers look elsewhere, daily newspapers continue to be our main source of information, shaping citizens' understanding of the world, and their reactions to events. At the same time, continuing a long–term trend in media ownership, newsrooms have been gutted as new owners prioritize double–digit profit margins. Dwindling reporting staff is able to do less and less actual reporting, as they become more and more reliant on official releases and carefully tailored public relations handouts.

In The Postmedia Effect, Marc Edge takes Canada's dominant newspaper chain, Postmedia, as a case study laying bare the changes in news economics that over the past two generations have hollowed out the nation's newsrooms, undermining not just citizens' trust in what is reported to them, but the very foundations of a democracy steered by an informed electorate.

Marc Edge, a business journalist who worked for dailies in Vancouver and Calgary before completing a PhD in media economics, has been documenting the political–economic transformation of the news business from its mid–century concentration (Pacific Press, 2001), through "convergence" (Asper Nation, 2007), and now, in his new book, the dire effects of the financialization of the news business. His work has also appeared in The News We Deserve (2011) and Red Line, Blue LIne, Bottom Line (2004). He lives in Ladysmith, BC.