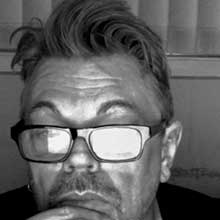 John Armstrong is an award–winning journalist, writer and musician. His early life as Buck Cherry, leader of the legendary punk rock band The Modernettes, is chronicled in his first book Guilty of Everything, which was shortlisted for a BC Book Prize.

After the band broke up Armstrong became a journalist, his account of which appears in his 2007 book Wages. Armstrong won multiple awards for critical writing, feature writing and hard news during his 15–year tenure at the Vancouver Sun.

Armstrong's most recent book, A Series of Dogs, is about his most enduring and rewarding relationships, with the dogs he's owned over the decades. He lives in Chilliwack, BC.