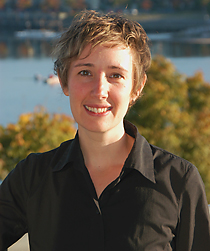 Andrea Langlois has been involved in autonomous media for almost ten years. Andrea was an active member of the Indymedia movement (CMAQ.net) for several years, and her voice has sailed the airwaves on many stations, from Montreal's CKUT, to Nelson's CJLY, and has been wild and free during many pirate radio broadcasts. Autonomous Media: Activating Resistance and Dissent (Cumulus, 2005), the book she co-edited with Frédéric Dubois, documents uses of media by social justice movements in Canada; it was published in French translation by Lux Éditeur in 2006. She works in communications in Victoria, BC, and is the editor of the quarterly magazine BC Organic Grower.