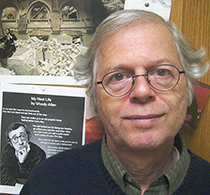 Ken Norris was born in New York City in 1951. He emigrated to Canada in the early seventies and soon joined the infamous Vehicule Poets, who were essential in helping to develop and maintain a particular style of Anglo poetry in Montreal. He became a Canadian citizen in 1985.Norris is the author of more than two dozen books and chapbooks of poetry, and is the editor of eight anthologies of poetry and poetics. His work has been widely anthologized in Canada and throughout the English-speaking world, as well as published in translation in France, Belgium, Israel and China. Norris has been Writer-in-Residence at McGill University and the Visiting Professor of Canadian Studies at Western Washington University. For the past twenty-eight years he has taught Canadian literature and creative writing at the University of Maine. He currently divides his time between Canada, the United States and Asia.