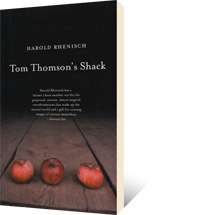 City and country are reconciled in this series of short prose pieces encompassing Toronto’s vast urban sprawl and British Columbia’s Interior. On a visit to Canada’s largest metropolis, the author is drawn north to Kleinburg, site of Group of Seven artist Tom Thomson’s studio. There, he finds himself immersed in the crucible of "Canada", the cultural construct he recognizes from elementary–school textbooks. And suddenly, it all falls into place: rural, suburban, and urban coalesce in Rhenisch’s spare, acutely perceptive words.

Rhenisch brilliantly distills the uneasy but indelible connection between th electronic grid that is Toronto and the valley south of his Cariboo home that is — according to Buddhist monks — the Centre of the Universe. Encounters with beekeepers, backwoods ranchers, university students, book publishers, home–brewers, cowboys, horse logger poets, fly fishermen, flora, fauna, and the land itself drive this thought–provoking deconstruction of the urban–rural divide.

Harold Rhenisch was born in Keremeos in 1958, son of an orchardist. Today, he lives at 108 Mile Ranch, BC, with his wife and two young daughters. He is the author of a novel, eight books of poetry, and Out of the Interior, the acclaimed precursor to Tom Thomson's Shack.