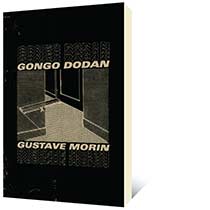 Gustave Morin has spent a life carving out a bold and courageous body of work that questions and expands the definition of poetry. The vision and the range of his work, including the books Clean Sails (2015), The Etcetera Barbecue (2008), and A Penny Dreadful (2003), show him as one of the more accomplished literary innovators in our age, committed as he is to the opposite of whatever the official culture endorses.

His new book Gongo Dodan is comprised of sixty–two unusual poems, of course. Gustave Morin's poems have never played by the rules, opting instead to playing for keeps, gleefully channelling those cosmic and eternal verities that have long been associated with both the written word and the colossal image.

Gongo Dodan is the result of a lifetime of absorbed aesthetic philosophy shot through many critical social commentaries, all of which serve to illustrate how an amalgamation of a knowledge of the arts, when applied to the art of writing artfully, can come to inhabit one word pushed beyond its own inevitable plasticity – poetry.

Gustave Morin's previous New Star title, Clean Sails (2015) is the world's largest volume of typewriter poetry. The Etcetera Barbecue was published in 2006 by BookFug. His 2003 title, A Penny Dreadful, one of the few collage novels ever to appear in Canada, is now scarce. Gustave Morin has also produced twelve short–run books and chapbooks. He lives with his gals, Jenny and Nova, in a small mid–western city on the edge of The Canada.