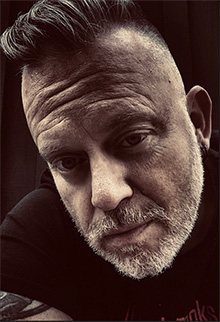 A former member of the artist-run Kootenay School of Writing collective, his critical writing on avant-garde poetics and radical social movements has appeared in Anarchist Studies, Armed Cell, Fifth Estate, Perspectives on Anarchist Theory, The Poetic Front, West Coast Line, and XCP: Cross Cultural Poetics. He edited the three-volume anthology Open Text: Canadian Poetry and Poetics in the 21st Century (2008-2013), and was Critical Editor for Alice Becker-Ho's The Essence of Jargon: Argot & the Language of the Dangerous Classes (2015).

Currently he is editing The Amourous Comrade, a collection of writing on anarchist sexual politics by É. Armand. A book of variations based on the writing of 15th century poet François Villon is also forthcoming. He is Convener of Creative Writing at Capilano University in Vancouver.