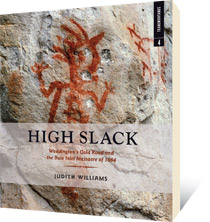 "Engaging ... Williams writes sensitively and with a minimum of academic jargon ... successfully reveals some of the anxieties of the colonial project in British Columbia without losing sight of the fact that the war, far from being a mere anecdote on the colonial stage, was the 'thin edge of the wedge' of the latent violence that has always simmered just underneath the surface of the colonial enterprise more generally. .. . a desperately needed antidote to (and replacement of) Mel Rothenburger's one–sided, and ultimately racist, polemic The Chilcotin War." – BC Studies

"This engrossing and well–researched account of life in the interior of British Columbia over 130 years ago is greatly enhanced by maps and black–and–white photographs." – Canadian Book Review Annual

"An excellent introduction to a subject in British Columbia's history which has not been explored to any extent up to now." – BC Historical News

In the winter of 1861, Robert Homfray made a perilous journey up Bute Inlet to begin surveying for Alfred Waddington’s 'gold road’, which was to link British Columbia’s coast with the Cariboo. It was hoped that the road would open up the territory to gold prospectors and homesteaders; instead, it dead–ended just above Homathko Canyon with the massacre of the road crew sent to build it. The colonial government called it murder; the Tsilhqot’in people called it war.

More than a century later, Judith Williams retraces Homfray’s journey. By juxtaposing her impressions with the written and oral histories of the event, she peels back some of the many layers of 'truth’ to reveal what is both a stirring tale and an engrossing glimpse of life in the Chilcotin over 130 years ago.

High Slack is number 4 in the Transmontanus series.

Judith Williams is the author of Two Wolves at the Dawn of Time: Kingcome Inlet Pictographs 1893–1998, Dynamite Stories, and Clam Gardens. She is a member of the Refuge Cove Land and Housing Co–op.