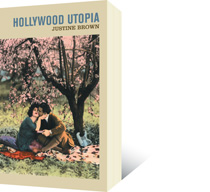 We’ve all read about Hollywood Babylon — the dark side of Tinseltown — but very little about Hollywood Utopia. In her new book, Justine Brown recovers the artistic and idealistic origins of the world’s movie capital and its playful and imaginative pioneers.

Hollywood Utopia examines the individual lives of the Theosophists (proto–New Agers), the directors and actors who believed that silent movies were a Universal Language which had the potential to save mankind, and the bohemian circles and Pygmalion figures that made up a community that believed 6it was creating a New World.

Brown’s rich and exotic prose makes us feel like we’re right there with the likes of Nazimova and Valentino, Lillian Gish, Mary Pickford, D.W. Griffith and Sergei Eisenstein. In her homage to a few of the lesser gods, we come to know more about the creative forces of early Hollywood.

Justine Brown was born in Vancouver and grew up in bohemia, living with her mother in a variety of places, including London, Ibiza, New York City, and a Kuper Island, BC commune. A graduate of the University of British Columbia and the University of Toronto, where she received an M.A. in English Literature, Justine teaches in the Department of English at Langara College, Vancouver. She is the author of All Possible Worlds: Utopian Experiments in British Columbia.