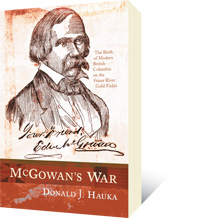 Could a horde of American miners have delivered British Columbia into the hands of the United States in 1859?

In McGowan’s War, Donald J. Hauka argues that the new colony was a rifle shot away from war and annexation during the fateful winter of 1859, when the British Crown could barely control 30,000 politically divided American miners camped the length and breadth of the Fraser River. Enter Ned McGowan, a San Francisco judge with a questionable past and his own plans to take over the territory.

McGowan’s War is a rollicking tale of corruption, greed, incompetence and company politics that just happens to be true. It is a must–read for political junkies, historical buffs, and anyone who has ever wondered why BC politics are so odd.

Donald J. Hauka is a B.C. journalist, novelist, screenwriter and amateur historian. He has written several historical dramas for CBC radio and covered both B.C. and federal politics for twenty-five years for a variety of newspapers, including The Province.