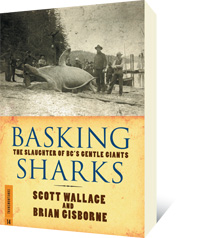 The basking shark, a fish the size of a London bus, used to appear off the BC coast every spring. During World War II, the fish became a nuisance to commercial nets and fishing trollers. Gliding just below the surface, the basking shark was an easy target for a new pest eradication program that touted killing one of the "plankton–eating monsters" as great sport.

By 1970, the basking shark was virtually eradicated in BC. Now researchers Scott Wallace and Brian Gisborne have pieced together what there is to know about this locally extinct ocean denizen.

Basking Sharks is number 14 in the Transmontanus series of books.

Scott Wallace is a marine conservationist working for the David Suzuki Foundation. He lives in Black Creek on Vancouver Island.

An experienced mariner, Brian Gisborne was a commercial fisherman for eighteen years. He was fortunate to see hundreds of basking sharks as a child, but has not seen one since 1973.