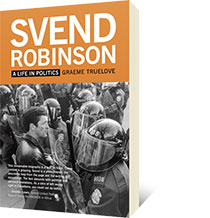 Svend Robinson: A Life in Politics

About Svend Robinson: A Life in Politics

Few politicians have enraged opponents, frustrated colleagues and polarized Canadians like Svend Robinson — but few embraced the causes he did. Over his twenty-five years as a New Democrat MP, Robinson was imprisoned for blocking loggers from clear-cutting in Clayoquot Sound, assaulted by police while protesting at the 2001 Summit of the Americas, expelled from foreign countries for defending human rights, and harassed after coming out as Canada's first openly gay MP. Robinson always took his ideals to the front lines, helping to define the Canadian left.

Though his brash tactics dominated headlines, Robinson's full story has not yet been told. In this in-depth biography, Graeme Truelove explores an accomplished life and career, including Robinson's difficult childhood, his growing realization of his own sexuality, and the bipolar diagnosis which followed his baffling, career-ending theft of a diamond ring. A portrait emerges of a complex figure — driven, gifted, visionary and flawed — who challenged his country and continues to make his indelible mark on the world.

Graeme Truelove, who grew up in Delta, B.C., has worked for the House of Commons and the Library of Parliament in a variety of professional capacities since 2001, and was an intern in Svend Robinson's Ottawa office from 2002 to 2004. Truelove has also worked for Frontier College as a literacy teacher, and volunteered for the Ontario Public Interest Research Group, among other activist groups. He lives in Ottawa.