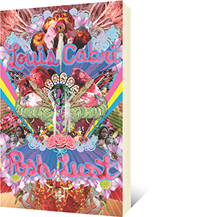 Posh Lust is about poetry that is everywhere findable, provided the bits of "everywhere" are words and provided this life is lettered.

People study poetry and some read it. Poetry is a pinnacle art — as in "a small ornamental turret" — even when it's a drunk imaginary communist, or just a drunk imaginary. Kitsch makes the serious art of poetry bearable, so that poetry may become a situation where one is entertained by many an aspirational boner or becuntment in the literary field.

In Posh Lust a reader may find, among the 17 poems in each of the 4 sections (68 poems in all): a contemporary answer to "The Owl and the Pussycat," a hidden reworking of the Nixon tapes' anticipated visit by Allen Ginsberg, a cheeky idées reçues rendition of the great Guillaume Apollinaire, Bob Ross folded upon Ezra Pound on Chinese credit as Our Man in Havana, an anthem to letters that neither look nor sound like other letters, a treatment of the noises bursting from beneath letters as "9/11" remade for a B-movie horror film, Olsonian rhetoric cartooned in Walmart, repeal of the Canadian Wheat Board Act, one centred poem, a toastmaster's neoliberal code of ethics, and plenty more, none of this being true — but truthful.

Posh Lust is poetry from "below." It follows a failed dialectic (sequitur / non sequitur) — as seriality without numbering, as a chain both of consequences and inconsequence, a chain broken every time it has tied, every time it tried linking together any A and B.

Louis Cabri is the name attached to the poetry books Poetryworld and The Mood Embosser. His chapbooks include Poems, Becoming Kitsch, What Is Venice?, —that can't and Curdles. His poetry has appeared in The Art of Practice: 45 Contemporary Poets, Open Text: Canadian Poetry & Poetics in the 21st Century, Post–Prairie: An Anthology of New Poetry, and many other publications and projects.

He teaches modern and contemporary poetry, literary theory, and creative writing in the undergraduate and graduate programs at the University of Windsor.