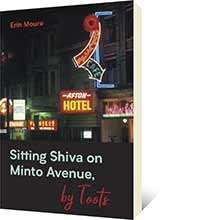 About Sitting Shiva on Minto Avenue, by Toots

"A beautiful testimony to a life bravely lived on the edges of contemporary values."
— Aaron Peck

Sitting Shiva on Minto Avenue, by Toots is the story of a man who had no obituary and no funeral and who would have left no trace if it weren't for the woman he'd called Toots, who took everything she remembered of him and — for seven days — wrote it down.


Erín Moure, a poet who once lived in Vancouver, begins this "work of the imagination" ("minto," in Galician, means "I'm lying") with a quote from Judith Butler about those persons who have "come to belong to the ungrievable," though there may be some that grieve them.

In recording the tale of the little man, through memories and Google searches, the book gives a glimpse into an entire era of urban Canada, from Vancouver's Downtown Eastside and Main Street and Chinatown to a long-ago Montreal between the Great Depression and Expo '67.

Erín Moure's most recent book of poems is Planetary Noise: The Poetry of Erín Moure, edited and introduced by Shannon Maguire (Wesleyan University Press). No one alive now knows who Toots is.