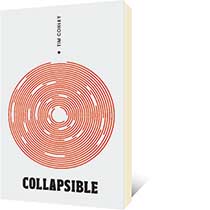 The short story form is unambiguously un-dead in this new album of thirty fictions from Tim Conley, coming at the reader in a variety of shapes and guises running the gamut from elliptical micro-fictions to tales of the inexplicable.

Steeped in Beckett, Borges and Nabokov, Conley's multiple universes allow for werewolves that excite ridicule not fear, and where birthdays are an occasion for forgetting not remembering. Here, the world greets a new colouring book with the same seriousness as it might some newly discovered gospel, and struggles to embrace fictional celebrities with the same ardour it reserves for real ones. And why not a variant of origami that is used on the human form?


"In this witty and dynamic new collection, Tim Conley shows us how reality, the story, and the human are a single marvellously entangled surface. Like a Moebius Strip, with all our surprise endings, paradoxes, mysteries, ambiguities, comedies, ingenuity and invention, we are our stories and our stories are us. In the tradition of Calvino, Lydia Davis, Borges and Kafka, these short fictions explore the strangeness, curiosity, beauty, contradiction, humour and delightful discombobulation of being alive and of being alive to the telling tale."


"This new collection is exploratory, and I mean that in the most laudatory sense. The stories of Collapsible are like dexterous, astonishingly articulate fish, darting just beyond our grasp within waves of distortion and illumination while writhing in their scaly, original beauty. Tim Conley writes out of his own fierce, delightful curiosity. He will inspire you to read and write and think with more audacity."

Tim Conley is the author of several books of fiction, poetry, and criticism, including Dance Moves of the Near Future (New Star Books, 2015) and Unless Acted Upon (Mansfield Press, 2019). He teaches modernist and contemporary literature at Brock University in St. Catharines, Ontario.