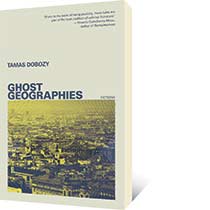 “Sharp to the point of being piercing, these tales are part of the best tradition of satirical literature.”
—Horacio Castellanos Moya, author of Senselessness

A wry, propulsive, visceral collection of stories about the afterlives of utopia, imagined and real, from the author of the Writers' Trust Prize-winning Siege 13.

Fleeing communist Budapest by air balloon, a wrestler tries to reinvent himself in Canada. On a formal invitation from the Party's General Secretary, a Belgian bureaucrat “defects” to communist Hungary, chasing the dream of a better world. Meanwhile, a provocateur filmmaker drinks and blasts his way to a final, celluloid confrontation with fascism, while an enfant terrible philosopher works on his prophetic, posthumously panned masterpiece, Dyschrony. These are among the decadent and absurd characters who hover around the promise and failure of utopia across the pages of Ghost Geographies.

A polyphonic descendant of Kadare, Bolaño, and Sebald, Tamas Dobozy masterfully traces and thwarts the porous borders between fact, fiction, ideology, history, and humor. The stories that make up Ghost Geographies simply confirm that, in the words of the Washington Post, Tamas Dobozy's “approaches to telling stories, and his commitment not only to provoke thought but to entertain, constitute a virtuoso performance.”

Ghost Geographies launched live on Zoom on Saturday, October 23rd. Check out the event video below.

Tamas Dobozy is the author of three previous collections of short fiction and novellas. His Siege 13 (2012) won the Rogers Writers' Trust Prize for Fiction and was a finalist for the Governor General's Award and the Frank O'Connor International Short Story Prize. He lives in Kitchener.