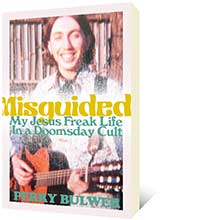 Misguided: My Jesus Freak Life In a Doomsday Cult

A unique first-hand account of a life spent in the Children of God, a/k/a The Family, a millenarian doomsday sex cult under the sway of a charismatic leader, David Berg.

In 1972, Perry Bulwer, a naive 16-year-old growing up in Port Alberni, a mill town on Vancouver Island in British Columbia, dropped out of high school to run away with the Children of God, one of a number of millennial Christian cults that sprang up in the 1960s and 1970s. Soon, Perry was preaching the cult's doomsday message on the streets of some of the largest cities in the world.

Along the way, we learn about the inner workings of the CoG, a/k/a The Family, and the machinations of David Berg, a self-declared endtime prophet who claimed to be personally mentioned in the Bible, and that God spoke through him. Berg predicted the imminent destruction of America, the appearance of the Antichrist in 1985, and the Second Coming of Jesus in 1993. Berg died in 1994, before various law enforcement agencies around the world caught up with him.

Perry Bulwer escaped The Family in 1991, managing to escape the cult's tight control while living in Asia. Returning to Canada, he tried to pick up his life where he had left it off two decades earlier. Through education Bulwer lost his religion, turning from religious extremist to secular humanist lawyer, fighting for the rights of sex workers and drug users living on the streets of Vancouver. Haunted by his own past, Bulwer became an advocate for thousands of second-generation survivors of the cult's child abuse and psychological trauma scattered around the world.

Born in Port Alberni, BC, Perry Bulwer joined the Children of God after dropping out of high school at age 16, spending the next two decades living in CoG communes across the world. In 1991, aged 36, he was able to escape the cult. Bulwer now advocates for second-generation cult survivors, continuing to shed light on the Children of God, a/k/a The Family.