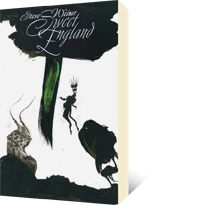 Steve Weiner's harrowing portrayal of post–Thatcher England follows a man of no known origin and unstable personality and his efforts to re–enter society after a long and unexplained absence.

The reader sees events through Jack's mostly uncomprehending eyes as he negotiates the margins of a London that resembles the city of memory and story only in incidental details. Replete with episodes of manic religion and delusions, the world in Sweet England is hard, dark, and dangerous. Exploitation and violence provide a steady background glow that illuminates Jack's relationship with Brenda, with whom he is living, drinking, brawling, and loving.

Weiner's London is equally a protagonist of his story. Dirty, sombre, the city is a palimpsest, the contemporary curry houses and mosques reinscribing the landscape dotted with old churches, monuments and graveyards that invoke old England's Christian saints and glorious past.

Phantasmagoric and allegorical, and told largely through dialogue, Sweet England's vision will haunt the reader long after they put down this compelling book.

Sweet England is Steve Weiner's third novel. His debut in 1993, The Museum of Love, was a Giller Prize finalist, and was published in the UK, Japan, France and Belgium as well as in North America. His second novel, The Yellow Sailor, was published in 2001.

Weiner's books have been compared to the novels of Céline and Burroughs, and the films of Lynch and Cronenberg. He lives in Vancouver.