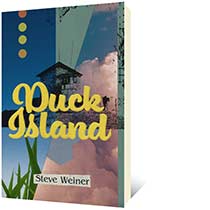 A young man returns to the town of his youth after a period spent on the road.

Unable to rekindle a high school flame, Cal Bedrick, who is Jewish, soon meets a very nice Catholic girl, Frannie Sinkiewicz, who falls hard for the troubled young man. Their courtship leads quickly to a marriage that fills their acquaintances with doubts.

The young couple's story is set against the backdrop of a fictionalized Wausau, Wisconsin, when the Vietnam was is drawing to an end. Duck Island is peopled by a cast of small-town archetypes: Frannie's conservative family including her brother / patriarch, Joey, manager of the town's convenience store where Cal gets a job; Father Lezsinski, the parish priest; Mr. Dula, who manages the men's shelter where Cal washes up; Frannie's best friend Wendy Gabrilska, and an assortment of war veterans, Indigenous people, immigants, the town's merchants, and local low-lifes who populate Wausau.

Like a David Lynch film, Duck Island vividly contrasts a society whose liberal surface conceals a troubled soul, which is revealed as the novel's events unfold.

Author Steve Weiner draws on his own mid-western roots in telling this tale of a deeply fractured, confused, society. The author of Sweet England (2010), The Yellow Sailor (2001) and The Museum of Love (1993; finalist for the Giller Prize). Steve Weiner lives in London.