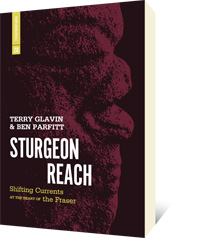 Sturgeon Reach: Shifting Currents At The Heart of the Fraser

Sturgeon Reach is the name some have given to a stretch of the Fraser River between Hope and Pitt Meadows, where its flow slows, and it deposits the gravel it's been carrying from the province's interior. Its story is one of rocks and stones, from its geological origins, from the mythic beginnings of human settlement, and from the arrival of Simon Fraser through to the onslaught of dykes and roads and bridges and foundations that today threaten the river's essential nature.

Sturgeon Reach hosts an incredible array of life, from giant black cottonwoods to a creature that dates from the age of dinosaurs –– the remarkable white sturgeon. This stretch of river is the spawning ground for major salmon runs. And for millennia, it has also been the home of the Sto:lo Indians.

How can we now live well along a river that has a ceaseless desire to overflow its banks and set its own course? How can we allow the life that the river's character fosters to persist in the face of overwhelming development? In the 20th book in the Transmontanus series, Terry Glavin and Ben Parfitt explore Sturgeon Reach — its geography, its history, its critical role in the coastal ecosystem, and the compelling story it tells about competing human needs.

Terry Glavin is a well–known author and winner of the Lieutenant–Governor's Award for Literature in 2009. He is the author of many books, several of which have been finalists for the Governor–General's Award and the BC Book Prizes. The Last Great Sea won the Hubert Evans Non–Fiction Prize. His books include A Death Feast in Dimlahamid (1990), Nemiah: The Unconquered Country (1992), A Ghost In the Water (1994), This Ragged Place (1996), The Last Great Sea (2000), and Waiting For the Macaws (2006).

Victoria–based freelance writer Ben Parfitt is the author of Forestopia: A Practical Guide to the New Forest Economy (1994) and Forest Follies: Adventures and Misadventures In the Great Canadian Forest (1998)