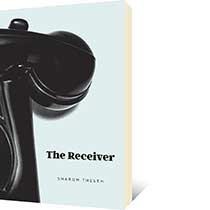 The Receiver is Sharon Thesen's thirteenth book, and the first from the three-time Governor-General's Award finalist since Oyama Pink Shale, six years ago.

More formally various than Thesen's recent books, The Receiver includes the short lyrics documenting the poet's witnessing that readers of her work will recognize, as well as various kinds of found poems, translations, prose poems, alongside some brief essays or memoirs.

Thesen's mother and father, friends, poets in her own life, their poems, might form the immediate subject of the poems here, but above all, The Receiver is about poetic imagination:

"The body is the receiver of all that is; poetic imagination the transmitter of the world. A memoir about poetic imagination, about the transmission of language / energy (the poet will have had 'some several causations'), contagion, ancestral / cellular memory, what is received through books, reading, talk, voices, rhythms of thought & experience. The education / mis-education of a poet 'by ear'; transmission / transcription / telephone / telegraph; annunciation as method." — Sharon Thesen

A native of Tisdale, Saskatchewan, Sharon Thesen grew up in Prince George and has been a British Columbia resident ever since. She now lives in Lake Country in the West Okanagan, and is professor emerita of creative writing at the University of British Columbia, Okanagan in Kelowna.

Three of Sharon Thesen's previous books have been finalists for the Governor-General's Award for Literature — The Good Bacteria (2006), The Beginning of the Long Dash (1987) and Confabulations (1984). She has also won the Pat Lowther Award (for A Pair of Scissors, 2006), and been a finalist for the Dorothy Livesay Poetry Prize (for Oyama Pink Shale, 2011, and The Good Bacteria).