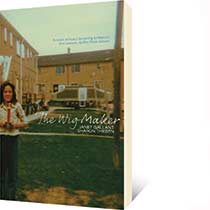 A powerful tale of violence, grief, resilience, and transformation, told in the voice of Janet Gallant, transcribed and lineated as a long poem by Sharon Thesen, The Wig-Maker gathers and weaves together themes and incidents that accumulate toward “the moan” of racism, sexual abuse, maternal abandonment, suicide, mental illness, and addiction.

Though the subject-matter ranges from a lengthy first-person account of sufferings both personal and cultural, historic and current, the pulse of the telling ultimately led to healing and reconciliation. Almost by magic — certainly with the assistance of the uncanny — the 18-month long process of Gallant's telling/Thesen's listening-writing resulted in Gallant's discovery of her true genetic, and social, identity. In the early part of her story Janet longs to know the reasons that her mother abandoned the family when Gallant was three years old, leaving four young children with their abusive father. She also wants to know what turned her father into “the monster” he had become. Her mother, Valerie Johnson, is Black and grew up in the Black community of Wildwood, Alberta; her Canadian serviceman father, Tom McCrate, grew up in Irish-Catholic poverty in Nova Scotia. As a biracial child, Janet was unaware until she was eleven years old that her mother was Black; nor did she know until very recently that Tom McCrate was not her biological father.

The twists and turns of the narrative gather a range of topics and incidents; the human hair industry, Black immigration to Alberta and Saskatchewan in the early 1900's, maternal abandonment, the stresses of military life, adoption search websites, the suicide of Gallant's teenage brother, the sudden death of her young husband, the stress-disorder of alopecia, and the loneliness of surviving all this but never finding answers. But some important answers have been given and received as a result of Gallant's research being inspired by the mysteriously healing process of the telling itself.

“The Wig-Maker” is Janet Gallant's song; her story comes to life in Sharon Thesen's poem.

The Wig-Maker launched live on Zoom on Thursday, May 6th. Check out the event video below.

Janet Gallant, the wig-maker, is the mother of two grown daughters. After thirty years in Calgary where she worked as an office administrator, most recently in the renewable energy sector, she relocated to Lake Country, BC, where she works as a wig-maker and consultant for women with alopecia. After her relocation to Lake Country, Gallant and Thesen, neighbours at first, became friends after spending an evening together waiting to know if they would be evacuated because of a wildfire in the area. Gallant wanted to tell her story, Thesen wanted to hear it. Gallant insisted she wasn't a writer; Thesen is an established Canadian poet and editor. Thus began what has turned out to be this tale.

Sharon Thesen is the author of a dozen books of poetry, a three-time Governor-General's Award finalist, editor of two editions of The New Long Poem Anthology, and a Professor Emerita of Creative Writing at UBC's Okanagan campus.